INFRAVIAS is presented in Germany and the United States

Supported by FAPESC (Foundation for Research and Innovation Support of the State of Santa Catarina), the INFRAVIAS project was taken for the third consecutive year to the 12th Pipeline Technology Conference, considered the largest conference in this business branch in Europe and closed on May 4 in Berlin, Germany. 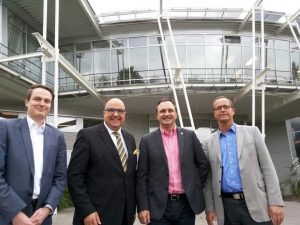 “In 2015 we present the concept of the project, in 2016 the construction and now the tests and final results. We have also closed two more important partnerships for the next project, that’s about to happen, and will be implemented in a 3-kilometer stretch in SC 401, “said Aloisio Pereira da Silva, Superintendent of Development of Greater Florianópolis Metropolitan Region.

After the presentations at the congress and meetings with research partners in Berlin, a working meeting took place at the IKT headquarters (German Institute of Underground Infrastructures). IKT director, Roland W. Waniek says: “IKT is a non-profit, neutral, independent institute that works to solve practical problems concerning sewers and underground pipelines. Since 2015 we have been in contact with Dr. Aloisio Pereira da Silva getting knowledge about INFRAVIAS, which brings a brilliant idea to coordinate the installation and, consequently, the maintenance of underground plumbing. In addition, INFRAVIAS promotes the sustainability of tree and rainwater management as well as the use of other innovative and environmentally friendly solutions”. IKT will be a scientific partner in the new phase of the project, scheduled for the second half of this year.

For the planning of this second phase, INFRAVIAS was also presented in May at the Texas A & M Transportation Institute in the United States, aiming to broaden the scope of the research, also encompassing areas related to iteration between infrastructure concessionaires and public bodies during phases of design, construction and operation of these networks, aimed primarily at supporting the deployment of the large-scale system.