The INFRAVIA is a system that organizes electricity, gas, water and telecommunications networks in underground ditches which are installed under public walkways. During the Smart City Expo Curitiba 2018, last February 28th, the INFRAVIA has established a new partnership through a protocol of intentions signed with CS BioEnergia S.A.. The initiative will ensure the production of recycled plastic through the urban waste that will be used in the system. The event was attended by the President of Sanepar Mounir Chaowiche, President of CS BioEnergia S.A., Fabiana Cristina de Campos, Director of Cattalini BioEnergia Sergio Vidoto, Civil Engineer of Parque Graziela Scarpari, and CEO of INFRAVIA Aloisio Pereira da Silva.

One of Cattalini’s main projects is the installation of a plant that will produce energy from organic waste and sewage sludge in Paraná, a Brazilian southern state. The initiative, a first-of-a-kind in Brazil, comes from CS BioEnergia S.A., formed by the state-owned Companhia de Saneamento do Paraná (Sanepar) and the Cattalini BioEnergia group. The plant is expected to generate 2.8 megawatts of electricity, enough to supply two thousand homes. The unit is in the testing phase and has received operating license from the Environmental Institute of Paraná (IAP) for the generation of energy from organic waste. 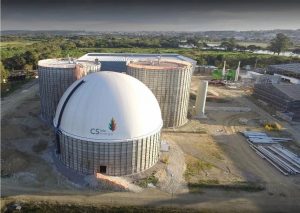 The Biogas is produced from the process of biodigestion of sludge from the sewage treatment plant with urban solid waste. The waste goes through a process of mechanized separation of materials, discarding for example the plastics and sending the wastes to the landfill. This material is used in the manufacture of the technical trench modules of the INFRAVIA system.

“The system was tested at Sapiens Park and now we want to do a study on the use of a material that we already have.” This is the purpose of the cooperation agreement, explains the director of Cattalini BioEnergia Sergio Vidoto.

The infrastructure of the INFRAVIA system installed at Sapiens Parque in Florianópolis uses construction waste and recycled plastic for the panels that separate the gas, water, sewage, electricity and public lighting networks. Each meter of structure of the INFRAVIA system consumed 100 kilos of recycled plastic from urban waste, which would have as destination, the sanitary landfill.

“The partnership with CS Bioenergia is fantastic because we were able to see the installation of the INFRAVIA on a large scale. In the case of Sapiens, we were concerned about using recycled waste from urban trash, which became plates for the construction of the panels through a strategic partner, Brasus, also present in this project. CS Bioenergia’s expertise will add much to the system, strengthening its sustainability aspect “, celebrated the CEO of INFRAVIA Aloisio Pereira da Silva.